Many of Minnesota’s native plants are seed factories. Most of our favorite species, while being fairly non-aggressive spreaders in the garden, produce large quantities of viable seed that can delight gardeners with their high germination rates. With a little help, plants that are typically well behaved in the garden can be counted on to spread to desirable areas. Dispersing seeds from your favorite native plants can be an easy and inexpensive way to expand native gardens into other areas of your yard.

A good strategy for using the seed your plants produce is to start planning in winter. Plan areas of your yard for seeding projects and spend next growing season preparing your site. Start by applying newspaper directly over turf grass areas early in the spring before grass has a chance to start growing or directly after your first mowing. Follow up with a 2”-3” mix of soil and compost (90% soil / 10% compost). On top of the soil mix apply 1” – 2” of shredded hardwood mulch, just enough to stabilize the soil mix and keep it from running off during rain storms. This will sufficiently kill all of the turf grass and weeds underneath. With this method, tilling the soil is unecessary and ill-advised, as tilling the soil will bring unwanted weed seeds to the surface, unleashing a potential explosion of undesirables. 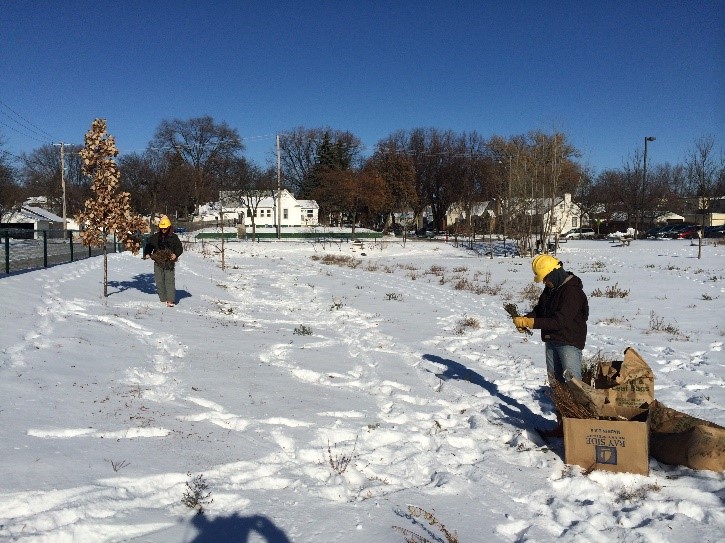 After a season of learning and collecting, late Fall into early Winter is a great time for those interested in expanding garden areas. By this time of year, many of the plants you will want to grow have dried seed heads that can be easily plucked and readily scattered. By dispersing seeds just before or after the first snow of the year, gardeners can mimic the life cycle of the plants and ensure that seeds go through the natural cycle of freeze and thaw that many varieties need for germination. The action of cold and snow on seed heads is called stratification. Many plants native to colder regions require the process of stratification to trigger germination in the early Spring of the following growing season. Snow pack over the winter can also protect wanted seeds from hungry birds throughout winter, ensuring that seed sown for expanding garden areas doesn’t become someone’s lunch.

Now it is time to settle in for the winter and plan for your next garden expansion while waiting for Spring to bring life to your first finished project.