Metro Blooms had 15 minutes of fame recently when its clean water work in the Harrison Neighborhood in Minneapolis was featured on a bus tour of innovative projects during the One Water Summit.

The annual conference, organized by the US Water Alliance, focuses attention on water issues. Public officials, business leaders, non-profits, environmental and policy groups and others from across the country attend the summit, held this year in Minneapolis in July. 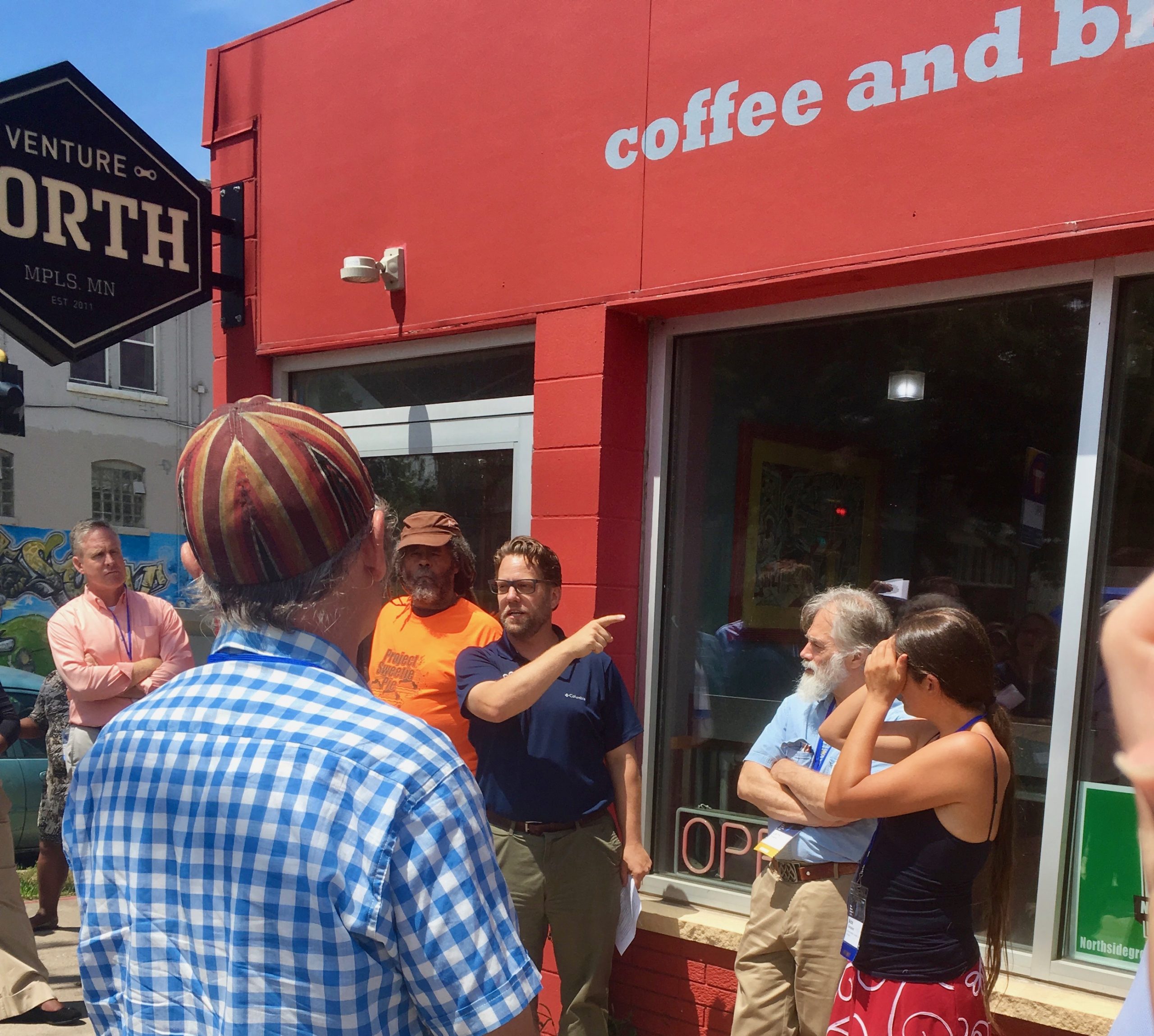 The theme of the bus tour was environmental justice and equity in North Minneapolis. Historically, parts of Harrison have suffered from environmental misuse, and nearby Bassett Creek and the Mississippi River are classified as impaired bodies of water. Metro Blooms has been engaging residents, businesses and institutions on green landscaping strategies to reduce stormwater runoff, a major cause of water pollution. This happens when rain and melting snow runs off of paved areas and compacted landscapes into storm sewers, collecting pollutants along the way. The sewers then empty polluted water into lakes, rivers and streams.

The tour stopped at Venture North bike shop, which is taking part in a program to address water quality, equity and sustainability in the neighborhood’s commercial corridor. Plans include redirecting runoff from the roof as well as permeable pavement in the back parking area. 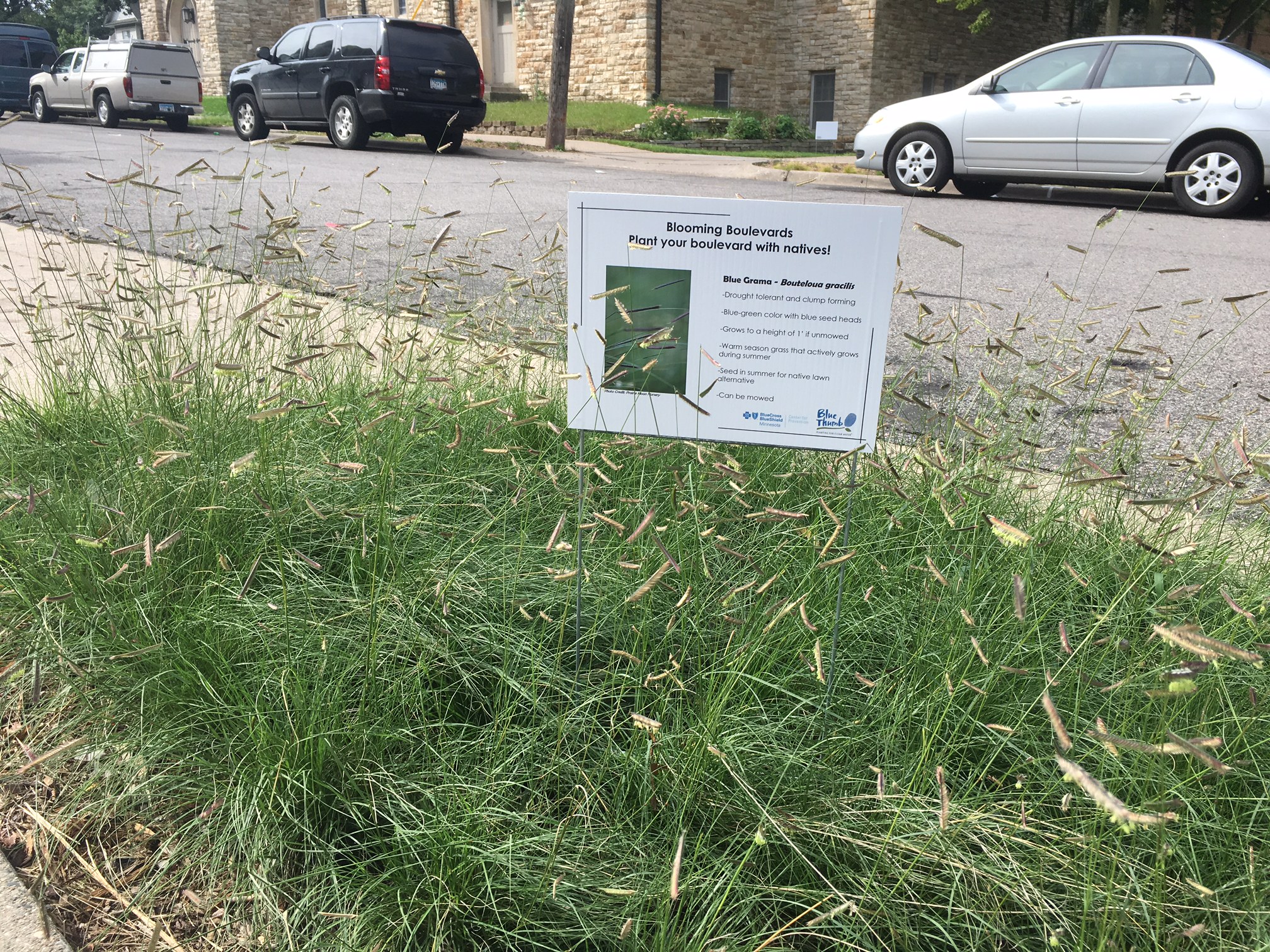 This pollinator-friendly Blooming Boulevard infiltrates stormwater. Long-rooted plants take up some of the water; the rest is cleaned naturally as it soaks into the earth.

Bus tour participants also had a chance to learn about Blooming Boulevards, another effort to reduce stormwater runoff. It started as a pilot project in partnership with Redeemer Lutheran Church, the founder of Redeemer Center for Life, which owns  the bike shop. In cooperation with the City’s Ash Tree Replacement Program, the church agreed to be a demonstration site for boulevard bioswales. On the block around the church and bike shop, Metro Blooms reshaped the raised boulevards into slight depressions. The depressions were re-planted with deep-rooted pollinator-friendly plants, creating swales that soak in stormwater and provide habitat. The program expanded to residential streets. Residents who received a Blooming Boulevard had to agree to maintain the landscaping. This program resulted in 37 boulevards that soak in runoff and provide almost 11,000 sq. ft. of pollinator habitat. 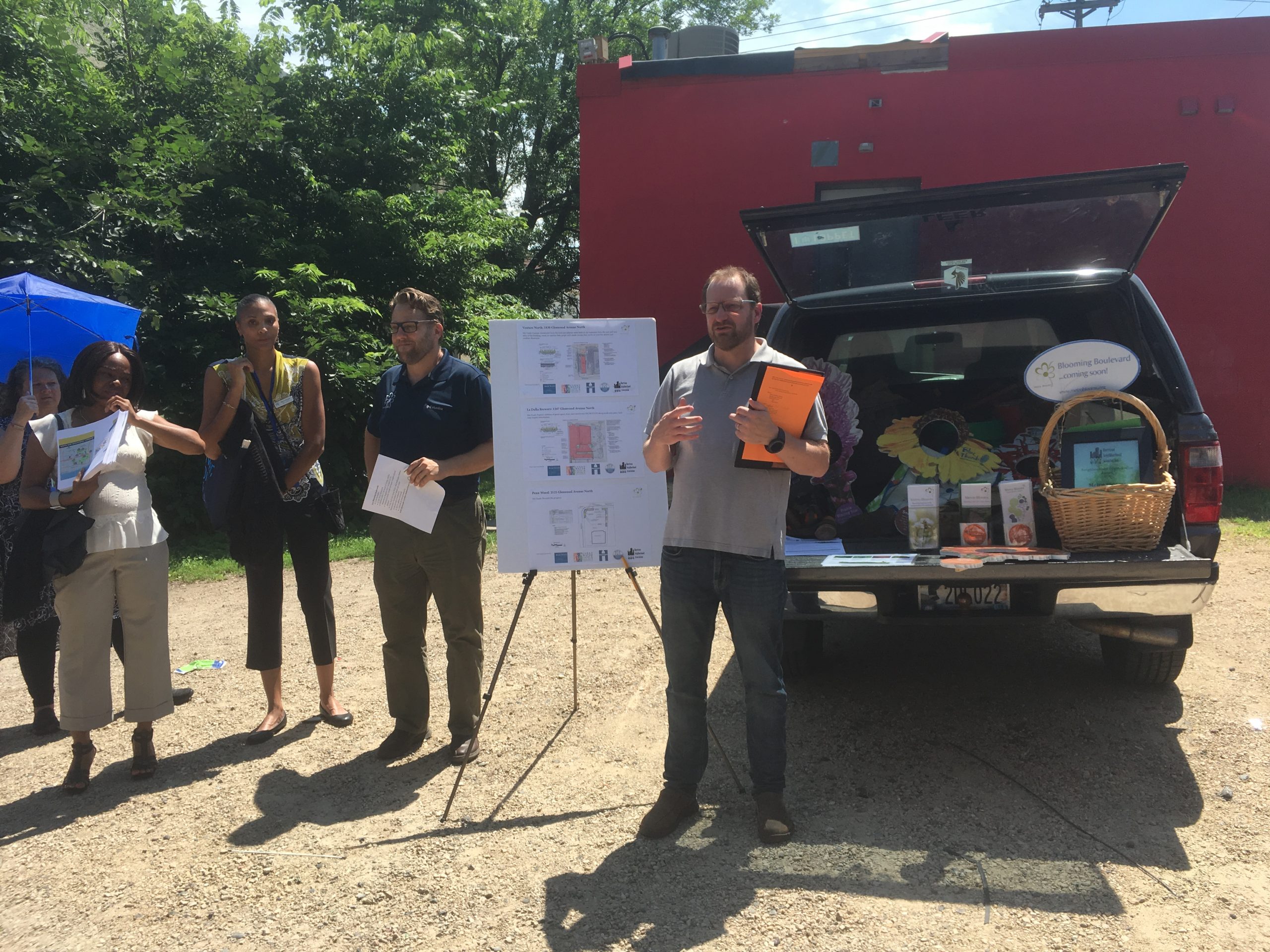 Kimberly Carpenter, Metro Blooms’ Community Engagement Manager, was pleased with the stop. “It went pretty smoothly,” said Carpenter, describing positive feedback from those on the tour. Carpenter attended the summit and was a member of the site tour planning committee. Preparing for the event had the added benefit of educating people closer to home on the committee about Metro Blooms’ water equity work. “This was an opportunity for them to get their feet wet,” she said.

One major takeaway Carpenter had from the summit was the key role that Metro Blooms can play as a relationship builder to address environmental justice and water equity issues. She pointed out that Metro Blooms programs depend on partnerships – with local government, watershed districts, agencies, community and neighborhood groups and others. Some of the partners for the Harrison programs include the HNA, Metropolitan Council, the Bassett Creek Watershed Management Commission, Hennepin County, the Clean Water Fund, and the Center for Prevention at Blue Cross and Blue Shield.

“Water requires interdependence,” she said. “Water touches so many aspects of our individual lives and our communities. It’s not a local issue. It’s a global issue. We need to be thinking strategically about how we’re going to work together to prepare for climate change.”